Enjoy a Moment of Peace and Tranquility at Shonenji Temple

Genbuzan Shonenji Temple is a Hongwanji Pure Land Buddhist temple. Pure Land Buddhism is a school of Buddhism founded by Shinran Shonin during the Kamakura Period. It gained widespread popularity among the masses during the Muromachi Period thanks to the missionary work of priest Rennyo Shonin, continuing to grow in popularity into what is today one of the main schools of Buddhism found in Japan.

Some 440 years after its founding (1578), today Shonenji Temple is run by 17th generation head priest Junsho Yoshimura. Almost 20 years have passed since Yoshimura assumed the chief priesthood in the year 2000.

Married to Victoria from the UK in the year 1995, the couple was blessed with three children. Their eldest son, Reo, married in April 2019 and he is following in his father’s footsteps and will be the future head priest of the temple. Both as a parent and as head priest there is no greater joy than this in the entire world.

We currently find ourselves in a period of population decline leading to shrinking towns and cities and an aging population, as well as communication breakdown and a general lack of mutual understanding, in times of great division and social disparity, and amidst a rapidly changing society. In times such as these, exactly what kind of presence should our temple aim to have and how can we find ways to create the pillars to support modern society? How do we communicate the Buddhist teachings of equality and tolerance? We hope to find ways to continue to support not only our followers but also the region as a whole, by injecting a new, youthful perspective into the temple.

As the head priest’s wife hails from the UK, the temple has come to thrive as a place of international exchange with great numbers of foreign guests coming to visit the temple. And now we recently opened the Shonenji Lodge with the aim of allowing even more guests to discover the local culture and traditions of this land as well as the wonders of Buddhism and its teachings.

No matter who you are or where you come from, we invite you to come discover our local people and atmosphere and learn more about the Buddhist teachings all while enjoying a precious moment of peace and tranquility. 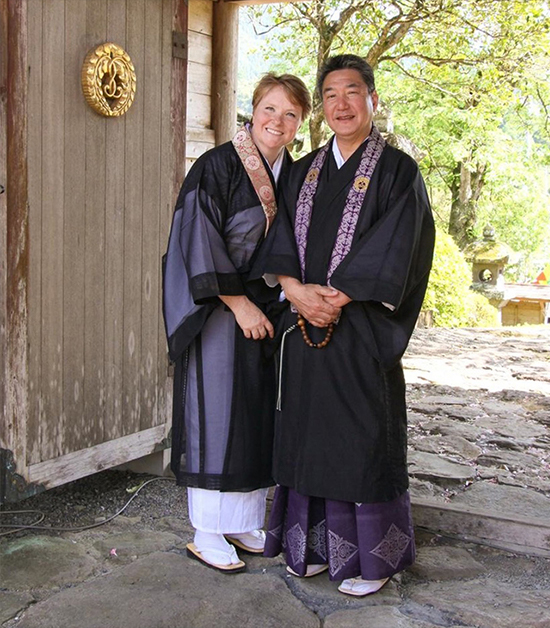 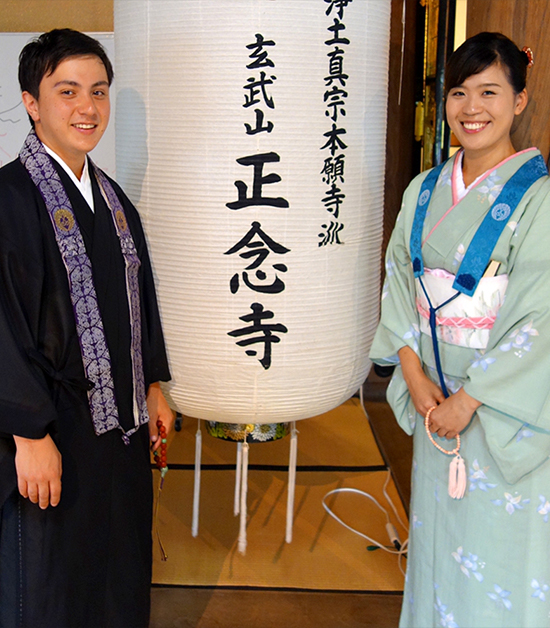 The History of Shonenji Temple

The Sengoku period (1467 –1600) can be translated literally as the Warring States period. As its name suggests, it was a time of several civil wars, some of which of course took place in Kyushu as well.

The lord of the Takachiho region at the time was Mitai Echizen no Kami Chikatake. Chikatake’s sister Sonohime had worked in Kyoto for a senior regent of Japan, Fujiwara (Kujo) Tanemichi, and returned to Takachiho after becoming pregnant with Tanemichi’s child. Later, as per Chikatake’s wishes, Sonohime was married into the Jushin no Kouroki family. Her baby’s biological father, Tanemichi, both served as senior regent and chef adviser to the emperor and was the head of the Fujiwara family, the most powerful family in Japan for years until 1534. Because he was the child of the most powerful person in Japan at the time, the Kouroki family took great care of the baby boy named Kouroki Sanetane.

It was at about this time that a warrior known as Yoshimura Shikubu Taneo (Tanekazu) built a castle between the villages of Kamino and Tabaru. As Sanetane came of age, he began to serve the warrior Taneo who he helped in building Genbu castle. The lord of the castle, Taneo named his legitimate child Yoshimura Soemon Tanetomo and appointed Sanetane as Tanetomo’s caretaker. When Sanetane came of age, he succeeded his father as the lord of the castle and Taneo entered the priesthood to become a Buddhist monk, henceforth known as Yoshimura Dokyunyudo. Sanetane was also a deeply religious person. He built a hermitage in Sugeki, Kamino village and became a Buddhist monk, after which he was known by the name of Syaku Shozen, or Shozenbo, for the remainder of his life.

On March 28th, 1578, Genbu castle was attacked and fell at the hand of Otomo Sorin. A devout Catholic, Sorin believed Christ to be the one and only true god and believed the worship of Japanese gods and the Buddha to be heresy, which was the prevailing belief among Catholics at the time, and thus ordered that Buddhist temples and shrines be burned. When Sorin set the Ryusenji temple afire, amazingly one jizo statue in the main temple managed to survive the fire. Today the statue is famous for being a fire prevention statue. In this way, the temples and shrines of the East and West Usuki-gun area lost their many treasures in the fires. Dokyunyudo’s son Tanetomo and his wife, their retainers, and villagers were all killed in the civil war as well, who Dokyunyudo and Shozenbo subsequently buried out of respect to the fallen.

Years later, when Dokyunyudo’s second son (Tanetomo’s younger brother) came of age, he built a new temple called “Shomyosan Shonenji”. This is the origin of Shonenji temple. Shozenbo became the first head priest of the temple, followed by Dokyunyudo and then Tanetomo’s brother, Dosho. The temple has remained ever since, for the next almost 440 years.